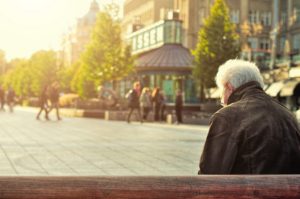 When do you become classed as elderly? Or are you as simply as old as you feel?

Research from the Office for National Statistics has revealed that although 65 has traditionally heralded the beginning of old age, 70 is now a more accurate figure.

65 used to be seen as the gateway to old age because it was when people began taking their state pension. But with the pension age for men and women moving up to 66 in 2020 and 67 by 2028, there is no longer such a marked distinction. Working patterns are also changing, with some people going part-time, some retiring early and others working past the usual retirement age.

The good news is that people’s life expectancy has increased due to medical advances and improved living conditions. Many people who reach 65 can expect to live at least another 15 years, with a significant number surviving into their late eighties or beyond.

In fact, it’s not uncommon to see octogenarians keeping young in body and spirit through all manner of activities. The University of the Third Age even held its first ever robot constructor’s challenge recently.

There’s also the example of Charles Eugster, who took up bodybuilding at the age of 87 and started sprinting for the first time in his life at 95, becoming World Masters Champion at 200m indoor and 400m outdoor. He may be an exception but the general pattern is shifting in that direction.

So if the percentage of older people in the UK is increasing, it could be more relevant to look at the number of years someone has left rather than their chronological age. The Centre for Ageing and Demography at the ONS found the point at which the average person would reach the ‘15 years of life remaining’ marker has changed over the last century.

It’s all very well living longer but are those years lived in good health?

While health by chronological age has improved over time, health by prospective age (or how much time someone has left to live) has declined in some cases and improved in others.

Overall, Libby Webb, senior research manager at Age UK, said: “People at age 70 now have the same life expectancy and similar health to people aged 65 in the past so, on average, we are definitely seeing people doing better than they did in the past.”

Not surprisingly, most people will still experience a period of poor health at the end of their lives and can have quite complex care requirements.

What does it mean for your finances?

In terms of your finances, the findings mean that you need to ensure you’ve got enough money to last for a longer retirement period than in previous generations. If we’re all likely to live longer, it’s important to make sure you can enjoy as much of your retirement as possible while you’re fit and healthy.

Also consider funding life in your later years, such as care home costs. Make sure your financial planning takes each phase of retirement into account, so whether you’re 65, 70 or 80 you can live life as you want.