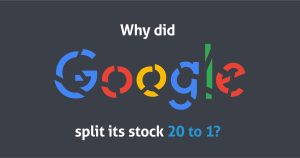 You may have seen the Alphabet (GOOGL) stock split in the news lately, which took effect today (Monday 18th July 22) . Below we explain what it all means for you if you have shares already, or if you have been thinking about buying some.

Alphabet – the parent company Google, and one of the most valuable companies in the world – has “split” its stock by 20 to 1! That means 1 share of Alphabet stock is now worth around 5% of what it used to be. But don’t panic if you have shares in the tech giant. You haven’t suddenly lost 95% of your investment. Here is how the stock split will affect you, and why it could be a good thing.

What is stock splitting?

Stock splitting is an action taken by a company to boost the “liquidity” of its stock.

However, this does not change the total value or “market capitalisation” of the company. All the shares in still add up to around $1.5 trillion, just as they did before the split. There are just 20 times more shares now than there used to be.

Where do all the extra shares go?

Now there are 20 times the number of Alphabet shares available, who gets them? The good news is, you do! If you owned 1 share in Alphabet (GOOGL) before the stock split, you now own 20 shares. This is why you have not lost any money. Your shares are still worth the same in total, only each individual share you own is worth less.

Why would Alphabet (GOOGL) split its stock?

There are two potential benefits to a stock split for Alphabet.

The Dow Jones is a market index of just 30 prominent companies listed on stock exchanges in the United States. The collective performance of the companies in ‘the Dow’ is regarded by many as a reflection of the whole economy. Google wants to be part of that index.

Why is the Alphabet (GOOGL) stock split a good thing for me as a shareholder?

You now have 20 times the number of shares you used to. So what? Well there are a couple of benefits for you as a shareholder.

The OTHER reason for the split

Alphabet plans to buy back $70 billion of its own stock from investors. By creating more shares, and thus increasing the number of shares each person has, it makes it easier for people to sell a portion of their shares back to Alphabet. Linking back to that point about flexibility above.

The Alphabet (GOOGL) stock split was a tactical decision by the company and has the potential to deliver positive long-term outcomes for the firm and its shareholders. However, the whole market is down right now, so it could be a while before those benefits are realised. Lastly, there is no need to panic seeing the share price drop 20x overnight… phew!