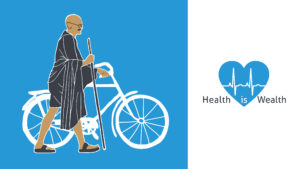 “It is health that is real wealth”
– Mahatma Gandhi

One of many wise things said by a very humble man, and something we should all keep in mind – especially in trying times like right now. But did you know he loved to cycle?

Okay. Gandhi didn’t say that. But he was famous for spending time on two wheels – for practical, health, and philosophical reasons – and he travelled incredible distances in the process.

Remember. You don’t need an expensive road bike or thighs like an Olympian to cycle for exercise. Just 30 to 60 mins at a moderate pace can burn between 300 and 1000 calories! Here are 5 fun facts about Gandhi’s cycling adventures to inspire you to dust off the old bike, get out the house, and keep fit during these tough times.

1. Gandhi emphasized the importance of walking and cycling and was known to call walking “the Prince of exercises”. We’re not sure what that makes cycling, but we guess has to be Queen or King, right?

2. When living in Ahmedabad, Gandhi used to ride his bicycle 7km round trip between his residence in Sabarmati Ashram and the Gujarat Vidyapith university (originally named Rashtriya Vidyapith), which he founded in 1920 and was Chancellor of.

3. Whilst staying in South Africa, in Johannesburg, he stood against a law which discriminated against people cycling on the roads.

4. In July 2017, Mahatma Gandhi’s bicycle was restored and kept for public display in the museum within Sabarmati Ashram in Ahmedabad. 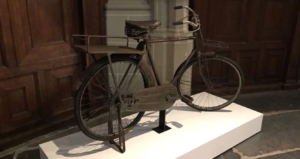 5. Gandhi never wore Lycra while cycling. So you don’t need to worry about it either!

Go on. Give it a go. It could be a habit you enjoy long into retirement. Or, at the very least, you’ll be fitter for enjoying life after work when the time comes. #HealthIsWealth